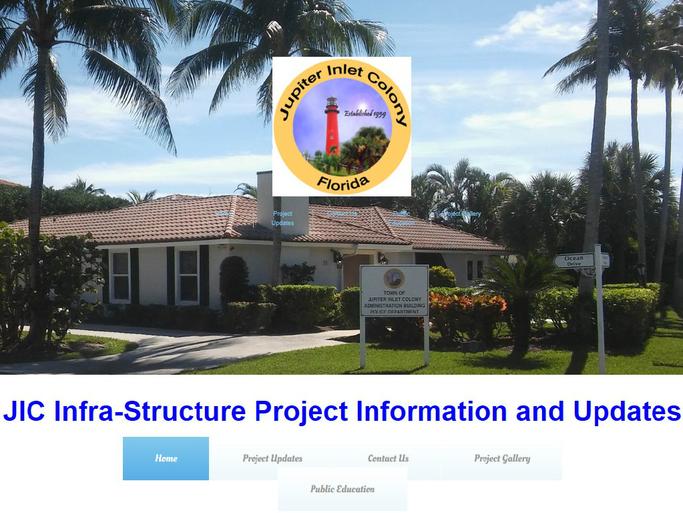 Information on this page will be updated with the latest updates at the top of the page.  Scroll down the page for older information.

September 15, 2015 - GREAT NEWS!!  We received a grant from the Florida Department of Environmental Protection in the amount of $750,000!  This is in addition to the $600,000 grant we have already received.  The Mayor announced last evening that the lowest bid for the entire project including sewer, storm-water, and potable water came in at $9.5 million.  The project had been estimated by the engineers to cost $7.5 million.  There are still some aspects of the project to be worked out so Mayor Dan said that the anticipated start date will be January of 2016 or even possibly as late as April, 2016.

August 10, 2015 - Tom Jensen, Arcadis, gave a presentation to the Town Commission about how the Infra-Structure Project will proceed.  The start schedule is still anticipated to remain the same as reported on July 13th below.  See the plan sheets below:

July 13, 2015 - The Mayor announced at the July Commission meeting that the project went out to bid on July 7th and the pre-construction meeting will be on July 25th.  The contract will be awarded in mid-September and the project will not begin until mid-October.  The delay has been due to permitting.  We submitted our grant application to DEP requesting $2,048,000 to help with the project.  We have applied for other grants in addition to the $600,000 we have already received.

July 7, 2015 - The start date of the Infra-Structure Project has been delayed.  The project is out for bid now.  Mayor Comerford anticipates an early fall start date.  This page will be updated as information is received from Loxahatchee River District.

At last evening's Commission Meeting I presented a report by JIC engineers Mock Roos evaluating possible sites for the relocation of the lift station currently proposed in Como Park.  Click HERE to view the report.  At our December Commission Meeting, some of our residents challenged your Commissioners to "think outside the box" given that the proposed location in the park would be there in perpetuity.  I subsequently had multiple meetings with Mock Roos, Arcadis, and the Loxahatchee River District discussing the feasibility, constructability, and costs associated with relocating the lift station.  During last evening's Commission Meeting, it was the consensus of your Commissioners and your neighbors in attendance that we proceed with purchasing the property at 50 Colony Road for the site of the relocated lift station and re-purposing the residence as a Town Hall, Building Department and Police Department.  During the next several weeks, I will be exploring funding resources for the purchase of the property that would not increase the infra-structure (sewer) assessment to each homeowner.  At the upcoming POA meeting, tentatively scheduled for February 2nd at the Beach Club, this proposal will be discussed in detail.  If you have any questions please call me at (561) 746-3787.

Click here for locations of inspections to be conducted.

Click below to view the PowerPoint presentation given by Dr. Arrington of the Loxahatchee River District on December 3, 2013.

The engineering report concerning the future JIC Sewer Project is available by clicking the link below.