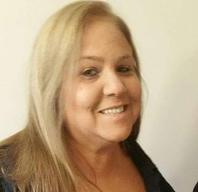 Jude moved to Florida in 2000, interviewed for a job at a bank, but, because her sister, who was a firefighter, recommend for her a career in dispatching, she started working for the police and fire departments in Lake Worth.  She liked the work itself, but found that the transition from a little town in Massachusetts to a city like Lake Worth was overwhelming and in 2001 went to work for the small City of Atlantis.  Jude was promoted from the Police Department to City Hall and then only about 6 weeks later, she stepped in as City Clerk.  Jude went through the Clerk’s Academy and attended classes that covered topics like government, budgets, taking minutes, supervised elections, management, parliamentary law and the Sunshine Laws.  In February 2009, she became a Certified Municipal Clerk.  Right now, she is working toward becoming a Master Municipal Clerk.

Jude has four grown children; Christopher is a Cook in Connecticut, Jonathan is a Computer Software Engineer in Boston, Megan is a Senior Property Manager in Boynton Beach, and Sarah is a Waitress in Boynton Beach. She also has two grandsons; Dillan, a high school football player who lives in Boynton Beach, and 11-year old Jacob who lives in Connecticut, and a granddaughter Layla Rose, who lives in Boynton Beach.  Jude spends quite a bit of her time with family and traveling back and forth to New England to visit.  Jude loves being part of the team here at Jupiter Inlet Colony and working with The Mayor, Commissioners and staff members.  Jude says her favorite part of the Colony is getting to know all of the residents--interacting with them, answering their questions, and helping them.  Jude is a Florida Notary Public and is able to provide Notary Services to our town residents.